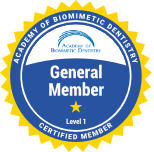 John Gammichia DMD graduated from the University of Florida College of Dentistry in 1995. He is and has always been passionate about teeth. He is also passionate about people. He loves what he does and loves it so much he decided to tell other dentists. He has lectured all over the country teaching young dentists about how to get this passion. He has been published in over 10 dental magazines. He has been practicing in Apopka with his father for over 16 years. As a dentist he always works under the premise "person first, then teeth". He feels like " knowing your patient" is often overlooked in his field. He tries to make the experience at his office a Five Star experience. From the first phone call, everything is geared for comfort. Geared toward warmth.

Outside of dentistry, he is a loving husband to Hilda and a devoted father to Luke, Madison, Noah, and David. He is active at his church Orangewood Presbyterian, where he has served as a deacon since 2005. He gave up basketball in 2007 (because he broke his wrist) and took up running. Since then he has completed four marathons. He loves sports especially the ones that his kids are playing. He is a coach and an even bigger fan. He is a Gator Men's Basketball season ticket holder and enjoys watching all Gator sports. GO GATORS!